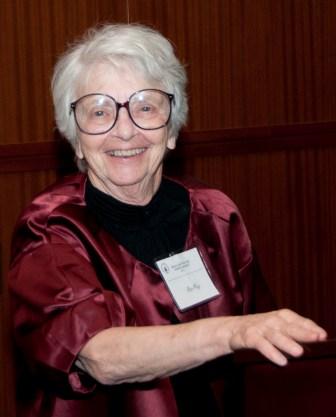 Peg Kay served as President and later as Executive Director of the Washington Academy of Sciences.  She organized five biennial Capital Science conferences, nine Annual Awards ceremonies, and managed much of the ongoing work of the Academy.  She even created and maintained its website.

From 1987 to 2011, Peg Kay was President of Vertech, Inc. a telecommunications consulting company. Earlier, she was Chief of Program Development for the Institute for Computer Sciences and Technology at the National Bureau of Standards (now National Institute of Standards and Technology). Peg Kay has been the recipient of a number of awards. While at the Institute of Computer Sciences and Technology, she received the Federal Laboratory Consortium Award for Excellence in Technology Transfer and a U.S. Department of Commerce Science and Technology Fellowship; she earned the Broadcast Industry Silver Anniversary Broadcast Preceptor Award for work done when she was a research associate at the Cable Television Information Center/Urban Institute; she was a Fellow-in-Residence at the Office of Telecommunications Policy/Executive Office of the President.  In memory of her husband of 50 years, after his death in 2005 she established the Irvin W. Kay Memorial Fund for Science Education. Peg Kay is the co-author of a textbook on public management, Government Oversight and Evaluability Assessment, which she has made available at no cost.

At the Washington Academy of Sciences Awards Banquet in May, 2012, Peg Kay was awarded with an engraved silver plate and celebrated for her 25 years of dedicated service to the Academy.

Since her retirement in 2012, Peg devoted her time writing “cozy” mysteries, all of which received the Washington Academy of Sciences Seal of Approval and all proceeds go to the Academy.

Peg expressed her love for fine art in a series of “Theme parks” in which she assembled pictures on a theme from all over the Web onto her own website.   She also contributed a collection of science related art.

Peg Kay had significant personal achievements and helped others to achieve their goals. With no doubt, it was her character, resilience, and passion that made those achievements possible. She was a great supporter of the Academy and her talents and leadership will be greatly missed.