The Washington Academy of Sciences Annual Meeting and Awards Banquet was held May 11, 2017 at the headquarters of the American Association of for the Advancement of Science in Washington. The Keynote Speaker was Wayne Gilchrest, a former US Congressman and environmentalist.

At the banquet, retiring President of the Board of Managers Michael Coble handed over the gavel to new President Sue Cross.  Michael’s last duty was to participate in the presentation of awards.
Congratulations to all! 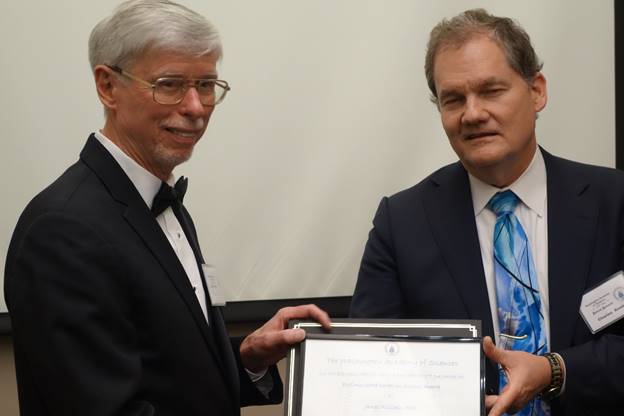 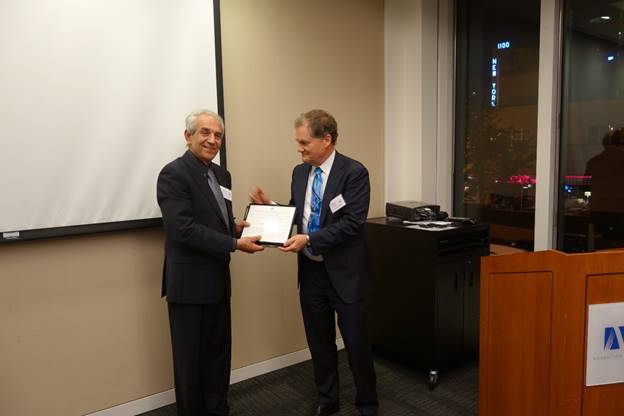 Dr. Hamid Gharavi received the Award for Distinguished Career in Science, presented by Dr. Chuck Romine (r). Dr. Gharavi was recognized for his extraordinary research accomplishments in the fields of information technology science and communications and for fundamental contributions to the science of wireless networking and smart grid communication. (Photo by Ram Sriram). 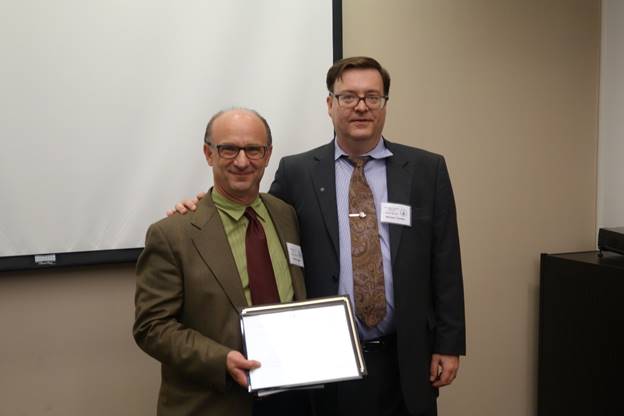 Dr. Kalman Migler received the Award for Distinguished Career in Science, here presented by Dr. Michael Fasolka (r). Dr. Migler was recognized for his research in the design and application of innovative optical and rheological experimental techniques to definitively measure and affirm key physical phenomena of polymer fluid flow. (Photo by Ram Sriram). 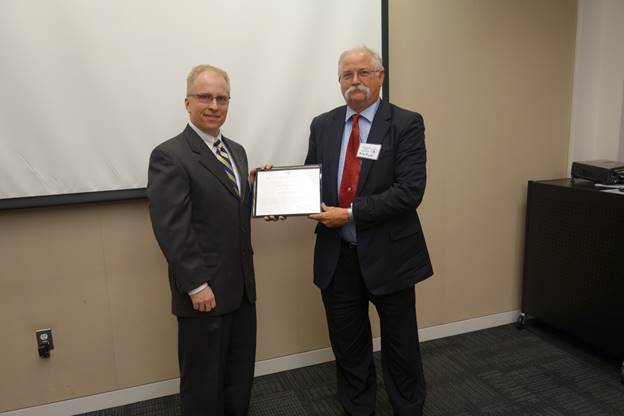 Dr. Jeffrey Bullard received the Award for Engineering Sciences, here presented by Mr. Nelson Bryner (r). Dr. Bullard was recognized for the world-class advancements made, through the application of materials science and engineering principles, to elucidate the underlying phenomena of portland cement hydration, and to effectively communicate these advances to the research and the industrial communities. (Photo by Ram Sriram). 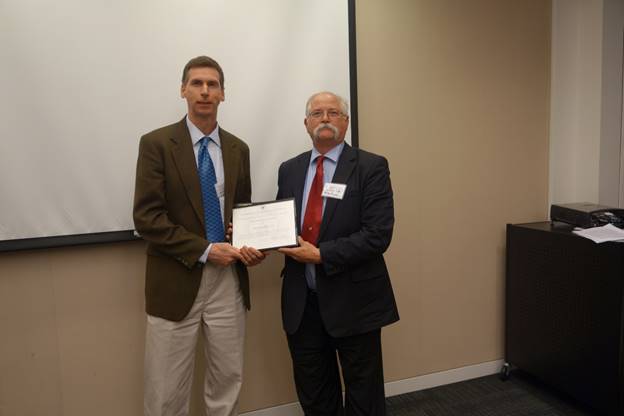 Dr. Kevin McGrattan received the Award for Engineering Sciences, here presented by Mr. Nelson Bryner (r). Dr. McGrattan was recognized for his development of the Fire Dynamic Simulator (FDS) computer fire model, which has changed the way the world does fire research to improve the fire safety of all occupants, building, and first responders. (Photo by Ram Sriram). 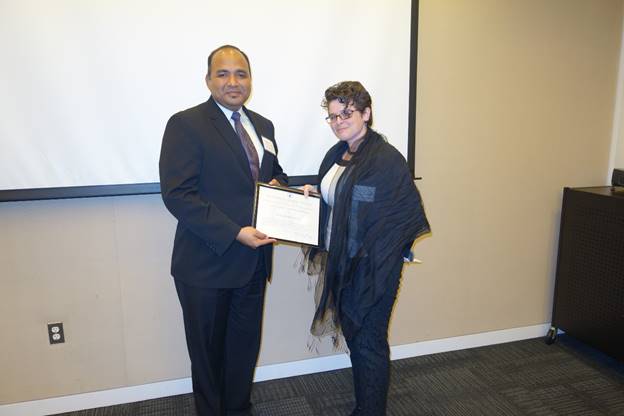 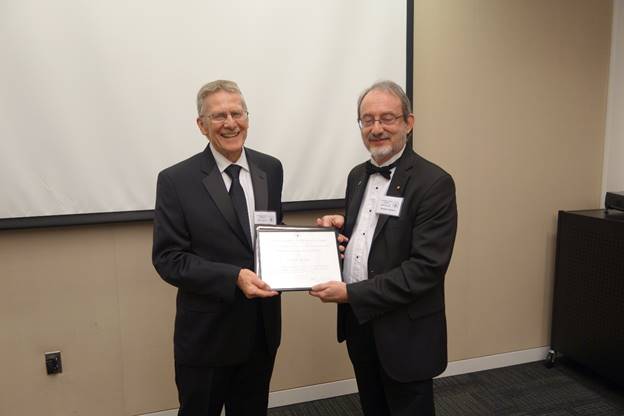 Dr. Dan Lozier received the Award for Mathematics and Computer Science, here presented by Dr. Ron Boisvert (r). Dr. Lozier was recognized for his outstanding contributions to the field of applied mathematics, especially for his leadership in the development of the National Institute of Standards and Technology (NIST) Digital Library of Mathematical Functions. (Photo by Ram Sriram). 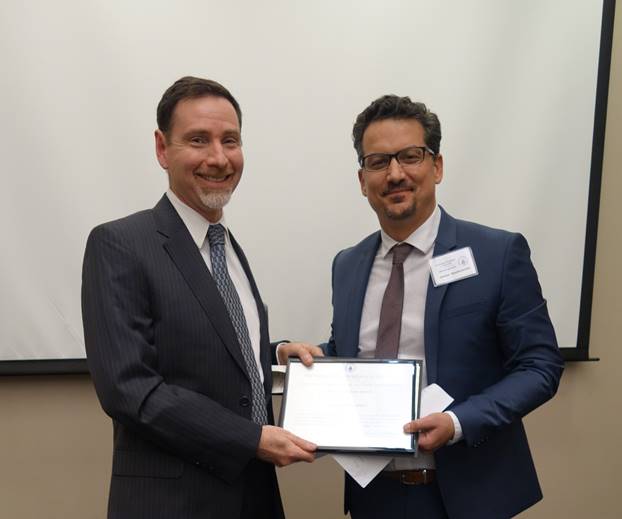 Dr. James Liddle received the Award for Physical Sciences, here presented by Dr. James Kushmerick (r). Dr. Liddle was recognized for his pioneering work in the creation of new nanoscale metrologies to enable the development and effective use of advanced nanofabrication processes to meet semiconductor industry demands and the elucidation of design rules for self-assembled nanomanufacturing based on DNA origami constructs. (Photo by Ram Sriram). 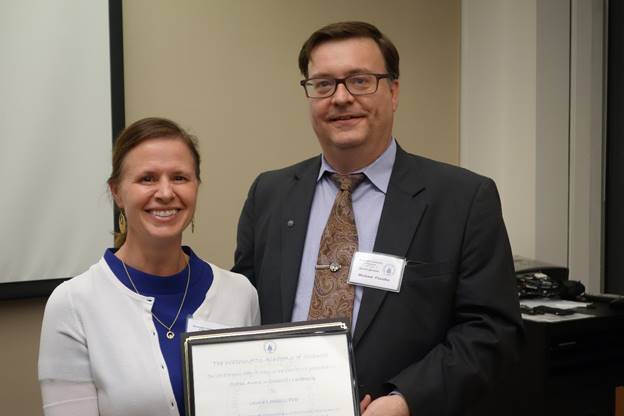 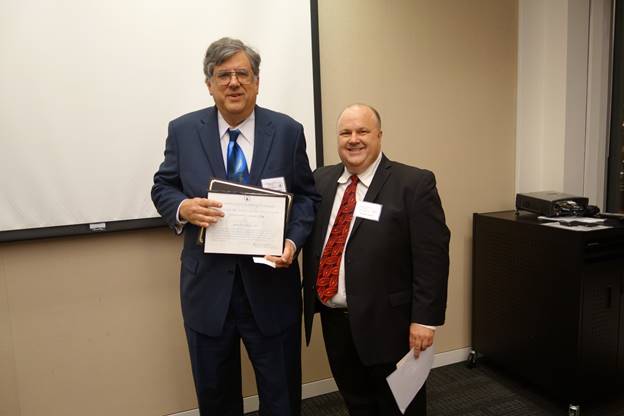 Dr. Jonathan Hardis received a Special Award in Science Policy, here presented by Dr. Michael Coble (r). Dr. Hardis was recognized for his over two decades of service in helping to guide, inform and manage the Physical Measurement Laboratory (formerly Physics Laboratory) of the National Institute of Standards and Technology, an organization which has yielded ground-breaking results in measurement science and technology and has received some of the world’s most prestigious awards, including four Nobel prizes in physics. (Photo by Ram Sriram). 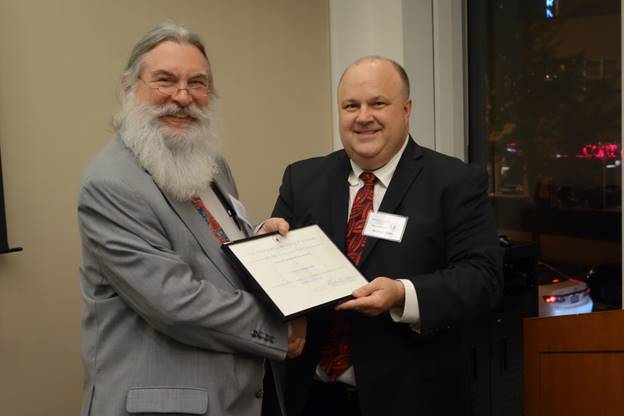 Mr. Terry Longstreth received a Special Appreciation Award, here presented by Dr. Michael Coble (r). As Vice-President of Administration, Mr. Longstreth was recognized for his exemplary service and dedication to the Washington Academy of Sciences. (Photo by Ram Sriram).

Congratulations to all these extraordinary scientists and engineers for their achievements!